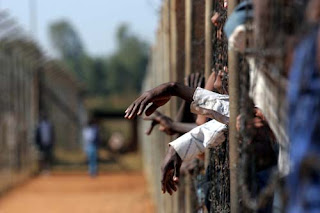 The ‘Access to Criminal Justice – Malawi Project’ commenced in July 2011 with the placement of three lawyers by IRLI within the Department of Legal Aid and the Department of Public Prosecutions.  IRLI is most grateful for the continued assistance of Irish Aid which has enabled this project to continue this year and to all who have supported us in our first year and continue to do so.

As we embark on the new phase of the project, Ruth Dowling BL (Department of Legal Aid) and Eithne Lynch, Solicitor (Department of Public Prosecutions) reflect on their experiences from the pilot year. We would like to share the highs and lows, of living and working in Malawi, the barriers to change and the impact that IRLI’s work has on enabling the most vulnerable members of society to access criminal justice.

Apart from the usual acclimatisation involved in moving to a country so far removed from our own in terms of climate and culture, the past year has proven one of the most fascinating and dramatic periods in recent history for Malawi.  It has been a year of political and economic unrest with Malawians demanding better leadership, governance and solutions to the many problems facing them. Two days of mass protests in July 2011 rocked the country where 18 people were killed and scores injured after police fired live ammunition at the demonstrators.  With rising concerns over the autocratic nature of the late President Bingu Wa Mutharika’s rule and violations in human rights, key donor states including the UK and the US withdrew key financial support from the country.  Outspoken critics of the regime were arbitrarily arrested and imprisoned.  The arrest of the now Minister for Justice and Attorney General Mr Ralph Kassambara in April this year resulted in international condemnation by media and rights based groups.

The untimely passing of Mr Mutharika in April this year and the swearing into office of now President Joyce Banda has restored calm and a sense of hope in the future of Malawi is now evident.  While vast challenges remain, the long shadow which hung over the country has passed and there is without doubt a renewed appetite for the protection of human rights.  It is against this backdrop that we journeyed through our first year in Malawi.  While there were and are many challenges working on access to criminal justice in Malawi, overall the highs outweigh the lows.

Our project aims were to tackle overcrowding in the two target prisons through capacity building, training of police officers and magistrates, running of bail clinics, involvement in the prosecution led diversion projects and progression of minor cases.

Our initial few months were spent developing good working relationships with key stakeholders within the criminal justice system.  In addition to our colleagues in the Department of Legal Aid and the Director of Public Prosecutions, we have developed an excellent network through the Malawi Police Services, the Malawi Prison Services, the Department of Social Welfare, local civil societies the Paralegal Advisory Services Institute and the Catholic Commission for Justice and Peace and international players such as Venture Trust, UNICEF and the European Democratic Governance Working Group. We recognised early on that no one body can tackle the overwhelming problems alone and greater synergy amongst key players was needed.  Throughout the year we worked hard on ensuring that our strategies aligned themselves with the good work being undertaken by our partners on the ground.

In the early stages of our project we faced many challenges due to an ongoing nationwide court strike over non payment of wages owing.  Unfortunately, this had a serious impact on our work in the prisons, as the courts were not functioning during this time and no bails could be granted.  However, every cloud has a silver lining and this strike enabled us to promote the use of alternatives to custody with the police.  We held training sessions with the police on the use of diversion[1] so that minor offences could be dealt with outside the formal court system.  The manner in which the police have embraced this approach to justice and their willingness to implement it in the Lilongwe Police Station has been an overwhelming joy to witness.  There is now a dedicated unit within the police station which filters cases that are suitable for diversion and a register has been established with the support of the Officer in Charge.  This ensures that the lessons learnt from this approach do not leave when IRLI leaves but rather becomes an ingrained approach by the police.

We have also set up a diversion aftercare program in conjunction with Venture Trust.  Together with Venture Trust we have trained police officers and social welfare officers, aswell as young boys who were previously inmates in Kachere Juvenile Prison, to deliver sessions over a 12 week period to young people who have come into conflict with the law.  The young people on the course are given the tools necessary to make better life decisions and coping mechanisms to face the challenges that they meet.

On the defence side of things our work focused on the provision of legal services to inmates in two of Lilongwe's overcrowded prisons – Maula Adult Prison and Kachere Reformatory Centre. Maula Prison was built to hold 800 inmates but today it holds approx 2000 inmates. Conditions are so bad for the male inmates that they have to sleep like sardines in a tin with each person lined up along-side the other. With such congestion disease spreads quickly, with poor hygiene standards and inmates only receiving one maize meal a day.

There are 500 men and women awaiting trial at any one time, with approximately 150 of whom are awaiting trial for homicide. Non – homicide matters are dealt with more quickly due to the minor nature of the offences. However these homicide matters are often left unprosecuted for years. When IRLI started work in Maula Prison there were men in custody since 2004 that had never been to court. Due to the shortage of lawyers in the country, and the under–funded Legal Aid Department, these men had never discussed their case with a lawyer and had never been offered bail by a court.

We initiated bail clinic consultations with those awaiting trial the longest and worked through the list in order. In our first year we assisted 34 bail applications and variations.  23 have been released on bail, most having been held for between 4 and 8 years in illegal detention. The 17 longest serving pre-trial detainees have been granted bail, covering those who have been in prison since 2004, 2005, 2006, 2007 and 2008.  Due to our intervention, there is currently no one on remand in Maula prison since before 2008.

In December 2011 a 28 year old man who had remained in custody for seven years - since 2004 - without having been to court, and without having met a lawyer, was granted unconditional bail.  The court stated that if the State failed to bring any proceedings within six months the High Court will consider the accused discharged of all charges. Her Worship, Justice Chombo of the High Court in her judgment stated, “This Court decries the lack of seriousness with which the DPP handles these matters”.

In July 2012 we secured the release of a man whose homicide case dated back to 1992. Whilst the court would not strike out this case despite the 20 year delay in prosecuting this man, a 6 month time limit was placed on the prosecution. He had spent 7 years in pre-trial detention from 1992 – 1999 and was returned to Maula in 2009. He had spent a total of 10 years in pre-trial detention until his release was secured.

The congestion in the prisons is so great that it was increasingly difficult to transport the volume of prisoners to court when required. A system developed where ad hoc ‘camp courts’ are held within the prisons to bring justice directly to those pre-trial detainees who are charged with minor offences. These detainees would otherwise stay for prolonged periods in detention without appearing in court or having access to bail, due to the shortage of fuel or the struggling court system. All relevant personnel, including a Magistrate, travel to the prison to conduct these courts. A selection of suitable pre-trial detainees for the court is made in partnership with a paralegal working in the prison and the relevant social worker. A legal aid clinic is held in advance of the court to provide the detainees with legal assistance.
Camp courts are very effective means of moving cases in bulk through the justice system.  It was originally believed that we would not have funding to run such an activity.  However in December 2011, we secured an individual donation specifically for this intervention, which enabled four such camp courts to be held during the pilot year. These camp courts brought 38 pre-trial detainees before a Magistrate so their case could be progressed and a bail application made.  18 were granted bail and 3 cases were discontinued. Through our intervention 38 people had access to a court which might not have happened for some time without this prison court. For those people where bail was refused or where the case was adjourned their cases can be said to have been successfully progressed as their file is now open before the Magistrate and also they are now aware of their rights and can ask their families to support their case.

More specifically the benefit of the camp court mechanism is that prisoners see the law in action and learn that they can have access to legal assistance. Magistrates also see inside the prisons and are able to do something practical to alleviate the situation. As a consequence, tensions in prison are reduced and the lower judiciary become more thoughtful about the utility of alternatives to prison in appropriate cases. Finally, prison officers come to recognise that facilitating access to justice is part of their role.

There are also difficulties facing the court system, which is seriously under staffed and resourced. We have met many prisoners who are waiting up to 2 years for judgment after their case was heard. We have initiated a programme with the court where these judgments will be followed up and either judgment delivered or case discharged. Otherwise these men would sit in prison, waiting.

A prisoner was arrested for murder in November 2006. His trial commenced in August 2010 however it was adjourned due to non-availability of witnesses. It was not completed until October 2011. This man is still waiting for his judgment. Even though his trial has been concluded he has not been found guilty or innocent but has spent almost 6 years / 70 months in custody.

We witnessed first-hand the difficulties facing Magistrates in trying cases. Often times they do not have access to the laws of Malawi, case law or international best standards, for example with regards sentencing, fair trial and treatment of young persons who come into conflict with the law. Recognising this need we authored a Human Rights Manual which was disseminated to all Magistrates within the greater Lilongwe area (20 in total) in June of this year.  The most heartening thing has been seeing the use of our manual in court and the appreciation which we have received for the research and effort which was put in to compiling it.  Above all else however is the hope that it will lead to a higher standard in the use of fair trial procedures and improve access to justice for the most vulnerable members of Malawian society.

As you can see the first year has been one full of interesting times. We are sure that this year will continue to produce some eye opening anecdotes and we look forward to sharing these with you all.

By Ruth Dowling BL and Eithne Lynch, Programme Lawyers with the Malawi project
Posted by Rachel Power at 7:09 AM