Another Malawian paper had an article on our project today. The Maravi Post had an article entitled "Three Irish Lawyers join Lehal Aid to unclog Justice System"
Posted by Hunter at 7:08 AM 2 comments:

The United Nations Human Rights Committee will meet for its 103rd session today. The Human Rights Committee is the body of independent experts that monitors implementation of the International Covenant on Civil and Political Rights by its State parties. All States parties are obliged to submit regular reports to the Committee on how the rights are being implemented. States must report initially one year after acceding to the Covenant and then whenever the Committee requests (usually every four years). The Committee examines each report and addresses its concerns and recommendations to the State party in the form of "concluding observations”. The Government of Malawi has not submitted a written report on its human rights record in respect of its obligation to implement the provisions of the ICCPR. Despite the lack of a report the Committee will review its record with a government delegation traveling from Malawi headed by the Attorney General.  The International Covenant on Civil and Political Rights (ICCPR) is an international treaty that outlines a set of fundamental rights guaranteed to all individuals regardless of race, color, sex, language, religion, opinion, nation, property, birth or other status. The ICCPR was adopted by the United Nations General Assembly in 1966 and entered into force in 1976. So far, 166 states, including the Government of Malawi, are parties to the Covenant. The Human Rights Committee is responsible for monitoring the implementation of the treaty by States Parties. Additionally, the 18-member committee also has the authority to interpret the treaty through issuing general comments.
In the absence of a state report, the Committee will consider information submitted by non-governmental organizations including the Centre of Development of People (CEDEP), the Centre of Human Rights and Rehabilitation (CHRR) and the International Gay and Lesbian Human Rights Commission (IGLHRC).

Read the full text of NGO Shadow Report on the Implementation of the International Covenant on Civil and Political Rights (ICCPR)
The shadow report highlights what is says are human rights violations which have been committed by the State of Malawi. Some areas it has highlighted include:


In addition the shadow report offers eighteen recommendations for actions that should be taken to bring the State of Malawi in compliance with its treaty obligations. Those recommendations include the right to peaceful assembly, the right to fair trial, the right to free speech, the need to decriminalize homosexuality, the need for equal rights between men and women, and the need to conduct immediate and impartial investigations into the July 2011 attacks on civilians and journalist.
For more information about the work of the Human Rights Committee, read the Civil and Political Rights: The Human Rights Committee fact sheet.
Posted by Hunter at 12:45 AM No comments:

I recently visited Kachere Juvenile Prison for young male offenders. Kachere is a small prison located in Lilongwe City Centre and serves the central region of Malawi. The prison was built in the 1930s. Today Kachere holds approximately 130 prisoners. The prison is incredibly small and visibly overcrowded. A recent report by the Open Society Initiative for Southern Africa stated that Kachere is at 200% capacity.

Fortunately, there is a willingness to change and I met with two organisations at the prison who are working with the prison officers and government to help improve prison conditions.
·       I met with a representative from Venture Trust a Scottish charity that is working in Kachere Juvenile Prison in Malawi to help young men reduce their reoffending rates, and broaden the range of education and employment opportunities available.
·       I also met volunteers from Music Crossroads who were teaching prisoners to play the guitar and keyboard. Music Cross roads are an an international nongovernmental organisation (INGO) that employ local facilitators and teachers using African music, theatre and traditional dance to build young people’s self-confidence.
Earlier this year the Open Society Initiative for Southern Africa conducted an audit on pre-trial detention and case flow management in Malawi. The audit identified that on average, 6,333 juvenile remandees enter Kachere prison each year.
Of the 130 juvenile prisoners at Kachere prison many are pre-trial detainees. This means that they have not yet been tried for the crime for which they have been accused. The United Nations Rules for the Protection of Juveniles Deprived of their Liberty (UNJDLs) set out detailed provision for the detention of children. In addition to the general provisions, the UNJDLs state the following in respect of pre-trial detainees:
“17. Juveniles who are detained under arrest or awaiting trial (“untried”) are presumed innocent and shall be treated as such. Detention before trial shall be avoided to the extent possible and limited to exceptional circumstances. Therefore, all efforts shall be made to apply alternative measures. When preventive detention is nevertheless used, juvenile courts and investigative bodies shall give the highest priority to the most expeditious processing of such cases to ensure the shortest possible duration of detention. Untried detainees should be separated from convicted juveniles.”
The Child Care Protection and Justice Act 2010 was enacted in July 2010. However, it will not be operative until such time as the public reformatory centres referred to under section 157 of the Act have been established. In an already over stretched criminal justice system the establishment of these centres is likely to take some time. That said, the Act does indicate a willingness take a new approach to dealing with young offenders. The Fifth Schedule of the Act sets out diversion options available to magistrates whereby a young offender may be diverted away from prison. Therefore, while it may still be some time away this legislation represents a move away from a culture of imprisonment
An interesting article featured in the Huffington Post a few years ago for the I Live Here project on Kachere
Posted by Hunter at 2:28 AM No comments: 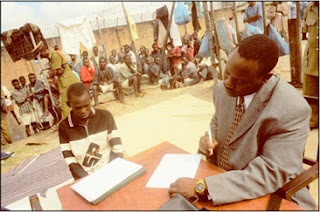 This week the project lawyers attended a Camp Court in prison.   These prison courts only handle matters involving minor offenders.  The courts are supposed to act as a useful way to reduce overcrowding, speed up justice delivery, and restore the ‘hope’ factor in the life of prisoners.
As a background to the camp courts, the prisons in Malawi lack the transport (or the petrol) to bring the prisoners to the court; or the courts lack the space to hold the prisoners at court in cells. Accordingly, paralegals invite the magistrates to establish ‘camp courts’ inside the prison. The Paralegals draw up lists of those on remand that have overstayed, are held unlawfully or have been granted bail but cannot afford the terms set by the court. They discuss the lists in advance with the prosecuting authorities. Magistrates attend court with the court clerk, police prosecutor and work through the list: they grant bail to some, reduce the amount set by an earlier court by way of bond or surety for bail and dismiss cases where the accused has overstayed, or set a date when the accused must appear for trial. The camp court is not a trial court, since the public cannot attend and witnesses are not produced. The chief benefit of this mechanism is that prisoners see the law in action. Magistrates see inside the prisons and are able to do something practical to alleviate the situation. As a consequence, tensions in prison are reduced and the lower judiciary becomes more thoughtful about the utility of alternatives to prison in appropriate cases.  Prison staff also comes to recognise that facilitating access to justice is part of their roles.
On the day there were about 14 cases listed for hearing, however unlike cases normally listed for hearing these matters were for bail applications, variations or to actually list matters before a magistrate.  In many of the cases remandees were being held on expired warrants and had already been granted bail but were unable to meet the sureties set out by the magistrate they had been brought before in arrest. While a small amount is usually set for the personal bond, somewhere around 1,000-2,000MK the status quo appears to be, even for very minor offences, that at least one if not two independent sureties will be expected. This poses a number of difficult issues for the remandee. 1. Many have no way of contacting their family, while  organisations such as PASI, CELA and the CCJP make efforts to find family members this is not always easy and is definitely not done in a uniform manner. 2. Many of the families do not have the amount of money that is required by the court for the surety. In many cases it is 10,000- 20,000MK which could be 6 months/1 year of a families earnings.
Therefore you have a situation where remandees are effectively denied bail due to the levels that they are being set at. PASI currently have a programme running where they are monitoring this matter to see how many remandees are effectively denied bail due to this type of bond being set. I’m somewhat of the opinion after visiting the camp court that if the defendants had legal representation a mplea could be made in respect of finances and cases could be put before the court which set out the High Courts position on denying bail in such a way. However at present the remandees have no legal representation at the courts….watch this space..

You can find it and a dashing photo of Sonya in her wig here
Posted by Hunter at 12:02 PM No comments: 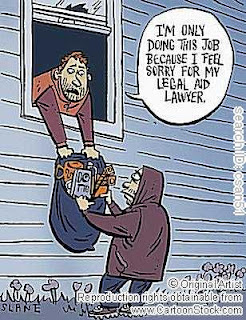