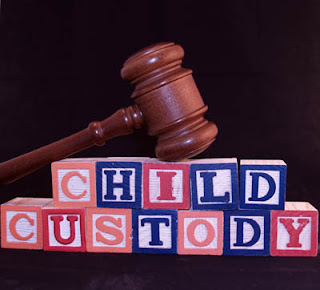 Our project recently came across five children aged between 11 and 15 years old who had been held in police custody for three months. The boys had been sentenced to two reformatory institutions called Mpemba and Chilwa based in southern Malawi.There are currently only two reformatory centres in Malawi where male juveniles may be sent. Chilwa Approved School founded in 1947 and Mpemba Boys founded in1963. Both of these centers can be hundreds of kilometers away from the district in which the boys have been sentenced however and as currently there is a severe lack transport [Due to fuel shortages] there was no vehicle available to move the boys and so they waited....and waited.
In addition due to insufficient funds police are unable to provide food for the prisoners held in their custody. Prisoners must rely on family and friends to bring food to the police station. The five boys were either orphaned or their families were unable to visit. They often complained of being hungry and relied on the kindness of other prisoners or police officers for food. The police were very concerned at the length of time that the boys spent in the cells and were very anxious that transport be secured to bring the boys to Mpemba and Chilwa. IRLM has developed a very good working relationship with the police and for this reason was given access to the police cells to witness the problem. IRLM worked together with the police and local NGO’s and fortunately the children were recently transported to the reformatory institutions.
The Children’s and Young Person’s Act 1969 is currently the governing legislation for juvenile justice (hopefully soon to be replaced by the Child (Care, Protection and Justice) Act). Section 24 of this act provides for the establishment of a Board of Visitors. The Board is tasked with monitoring the reformatory institutions to ensure that they are operating in the best interests of the child. The Board also has the power to release a juvenile that is held at an institution. It is in this context that IRLM recently had the opportunity to work with the Board of Visitors whom we were able to contact when IRLM also became aware of a juvenile ordered to be detained in custody until there was a positive change in the his behaviour. After assessment a social welfare confirmed that there was a positive change in his behaviour in early 2010, yet the juvenile remained in custody when we came across him a few weeks ago. IRLM successfully highlighted this case to police prosecutors, a child justice magistrate and the Board of Visitors and by working together the juvenile was released earlier this week.

The Convention on the Rights of the Child (CRC) states at Article 37 (b) that custodial measures should be “measures of last resort.” In addition, Article 40 CRC and section 42(2) (g) (iv & v) of the Constitution both provide that a child in conflict with the law has a right to treatment, which promote the child’s sense of dignity and worth, which takes into account the age of the child, and which ultimately aims for reintegration into society. For the five boys held in police cells and the juvenile that spent over a year too long in detention it is clear that much work is needed to ensure that rights provided in both national and international law are enforced.
Carolann Minnock (Programme Lawyer)
Posted by Hunter at 12:56 PM No comments:

The newest issue of the Law Society Gazette features an article by Programme Lawyer Sonya Donnelly on the IRLM project entitles Ireland promoting the Rule of Law in Malawi. You can find it on page 12 of the magazine here
Posted by Hunter at 6:16 AM No comments:

Lunchtime Seminar – Held without trial for up to 7 years: the forgotten prisoners of Malawi


Sonya Donnelly BL will give an account of her experience working within the criminal justice system in Malawi at 1.00pm on Monday 19th of December in Courtroom 13  of the Criminal Courts of Justice, Parkgate Street, Dublin 7.
CPD will be available for this seminar.
Posted by Hunter at 6:09 AM No comments:

Last Thursday we were kindly invited by an Scottish organisation called Venture Trust to the Kachare Juvenile facilities' Christmas party. The Venture Trust project helps the young men in the facility to change their behaviours, through time, space and intensive support in carefully designed programmes, which gives them the confidence, motivation and life skills they need to make those changes.The programme used in Kachere is designed to reduce re-offending among young men and boys released from Kachere. In reality they do much more for the guys in the prison and organizing this party for the boys was just one of additional things that they do on a daily basis. We've been privileged to work with them over the past few months and hope that it long continues. 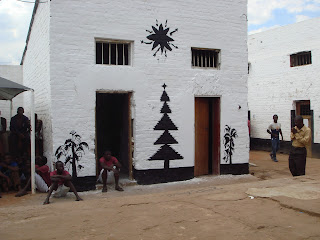 Christmas Tree painted on the wall of the prison
The purpose of the party was to showcase some of the skills that the boys have learned to a variety of the organisations that work with them during the year. The party started with some choral songs from the prison choir. Then a nativity play was put on by the boys and I have to say that the sight of a teenage boy dressed as Mary give birth to a baby jesus inside a juvenile prison in Malawi was not the way that I had planned to kick off my Christmas festivities but, like a lot of things since I've arrived here, it was unexpectedly excellent. The boys really took to their roles and had written the dialogue themselves with the help of a local drama group who work with the prisoners. The drama group, who are from Area 23 in Lilongwe, then put on a play which was centered around the story of two young men leaving the facility at the end of their prison sentence and the difficulties they could encounter once released. On leaving Kachere, young men often find themselves displaced from their families and communities, and with very poor prospects for employment or education. Without support, many are at risk of falling into patterns of re-offending, disadvantage and poverty. The play while touching on some very serious issues was done in a very lighthearted manner and went down a treat with everyone present. We even got to see an amazing sight of a prison guard play the role of....a prison guard. 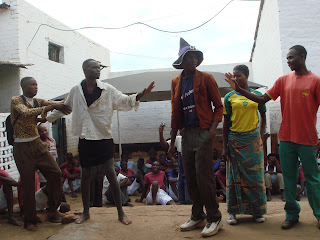 Area 23 Drama Group performing at the party
Finally we got a visit from a Malawian style Santa Clause, even dressed in an altered chitenge (this is an African garment similar to sarong, often worn by women wrapped around the chest or waist, over the head as a headscarf, or as a baby sling). I believe the photo has to be seen to be believed. 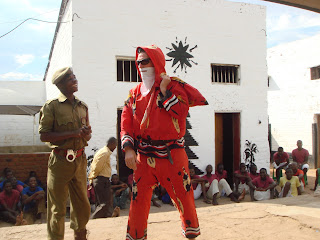 Venture Trust had also organized for a few of the groups attending to bring some sweets, drinks and soap as a present for the detainees. For many of the young boys in the facility this will be the only gifts that they will get this Christmas. However I was surprised and uplifted by the spirit on show during the day. The boys cheered and laughed during the performances, there was a great spirit of comradery between them and most positively there was a massive sense of respect and trust for both the prison guards, staff and indeed for the Venture trust employees.  While everyday is obviously tough in a prison which is so significantly overcrowded and I could talk in detail about the difficulties these boys face and the harsh sentences they are getting from the courts, I want to leave that aside for just one day and focus on the positive work that is going on there and the changes that good people are trying to bring about to improve the lives of the boys living there. They have been significant in trying to guide young men towards positive destinations on release.  It's not often on this blog I get to do such a things so I'll ask you to bare with me just for this one blog post, even the Grinch can be positive now and again!
Posted by Hunter at 1:42 AM No comments: