Mr Bruno Kalemba, The Chief Legal Aid Advocate or "The Chief" as he is affectionately known in the Legal Aid Department has just been made the new Director of Public Prosecutions by President Jyce Banda, replacing Rosemary Kanyuka in the position.

We at IRLI wish Mr Kalemba the best in his new post and hope to continue our access to justice work with him from the office of the D.P.P.

Ruth Dowling B.L
Posted by Hunter at 8:16 AM No comments:

Due to an ever increasing workload in the aftermath of Judicial Strike we've been a bit quiet on the blog lately but Ruth Dowling is back today with an excellent article on the new UN Principles and Guidelines on Access to Legal Aid in the Criminal Justice System.

This is ground breaking guideline as it is the first international instrument on legal aid. The document contains 14 principles recognising the “Right to Legal Aid” and how to ensure this right is available to Member State’s citizens.  There are 18 guidelines outlining how a functioning Legal Aid system should be implemented.


The notion of fair trial and access to justice is enshrined in international law through many different pieces of key legislation. Most notably in 1948 the Universal Declaration of Human Rights, outlined the key principles of equality before the law and the presumption of innocence, as well as the right to a fair and public hearing by an independent and impartial tribunal, established by law, along with all the guarantees necessary for the defence of anyone charged with a penal offence, other minimum guarantees and the entitlement to be tried without undue delay. In 1966 the International Covenant on Civil and Political Rights went further stating in Article 14 that everyone charged with a criminal offence shall be entitled to be tried in his or her presence and to defend him or herself in person or through legal assistance of his or her own choosing or assigned to him or her where the interests of justice so require, in a fair and public hearing by a competent, independent and impartial tribunal established by law.

The Lilongwe Declaration on accessing legal aid in Africa was a significant step regionally, recognising the difficulties many African nations have in meeting obligations in respect of legal aid provision. However the new guidelines provide very positive guidance for countries like Malawi. Malawi has drawn up a new Legal Aid Act which was published on the 8th April 2011 but it has yet to be enforced. The new act looks at legal aid as a service provided to persons by way of legal representation, legal advice or legal assistance and allows for the appointment of Legal Aid Assistants which will increase the number of professionals offering legal services. It will establish a new fund to be known as the “Legal Aid Fund” which will receive money from Government and from donors and CSOs. The Legal Aid department in Malawi is in need of much financial help. Malawi spends approx €125,000 on legal aid for both civil and criminal matters annually. This is about €0.01 per capita on legal aid. This is compared to approx €315,500 on the DPP’s office alone. While the police prosecutor’s also have a separate budget for the prosecution of minor files. The DPP offices have prosecution lawyers to prosecute “heavy-weight” offences i.e murder, rape but it is the police prosecutors that prosecute 90% of cases.

The total number of employees in the Legal Aid Department as of November 2011 was 176 posts of which only 24 are for lawyers. Currently there are only 5 Legal Aid Advocates working in the Lilongwe Legal Aid office and not all of them are available for criminal matters. The Legal Aid Department offices are only situated in the three main cities - in Lilongwe, Blantyre and Mzuzu. The Legal Aid Department does not have representation in the remaining districts. The Mzuzu office usually operates with only one lawyer. Most people are living in rural areas and so transport to the cities to see a lawyer proves too costly.

As a result of this 90% of criminal cases will generally proceed without the accused person having and legal assistance or representation. At present there are 489 people awaiting trial in Maula prison in Lilongwe, 63 of those have been in prison since before 2010 having never been to Court (some since 2005). There are at least 6 people waiting longer than 12 months for judgment after their trial concluded. Unfortunately Legal Aid, despite it's best efforts, does not have the capacity to follow up these cases with the courts on a regular basis.

This new resolution invites Member States, consistent with their national legislation, to adopt and strengthen measures to ensure that effective legal aid is provided, in accordance with the spirit of the Principles and Guidelines. Legal aid is an essential element of a fair, humane and efficient criminal justice system that is based on the rule of law.

In line with the Lilongwe Declaration and the Lilongwe Plan of Action for the implementation of the Declaration, the new Principles and Guidelines follow a broad concept of legal aid.  The term “legal aid” includes legal advice, assistance and representation for persons detained, arrested or imprisoned, suspected or accused of, or charged with a criminal offence and  for victims and witnesses in the criminal justice process that is provided at no cost for those without sufficient means or when  the interests of justice so require. Furthermore, “legal aid” is intended to include the concepts of legal education, access to legal information and other services provided for persons through alternative dispute resolution mechanisms and restorative justice processes, all matters in which Irish Rule of Law has been exploring within Malawi since our arrival almost a year ago.

A functioning legal aid system, as part of a functioning criminal justice system, will reduce the length of time suspects are held in police stations and detention centres, in addition to reducing the prison population, wrongful convictions, prison overcrowding and congestion in the courts, and reducing reoffending. It will also protect and safeguard the rights of victims and witnesses in the criminal justice process. Legal aid can be utilised to contribute to the prevention of crime by increasing awareness of the law.

Regrettably, many countries still lack the necessary resources and capacity to provide legal aid for suspects, those charged with a criminal offence, prisoners, victims and witnesses. The United Nations Principles and Guidelines on Access to Legal Aid in Criminal Justice Systems, which are drawn from international standards and recognised good practices, aim to provide guidance to States on the fundamental principles on which a legal aid system in criminal justice should be based.

With this new resolution it is hoped Legal Aid systems in pooer countries like Malawi will develop and help to ensure that no person is left sitting in prison for years without access to a lawyer.

It will now proceed to the Economic and Social Council in June and then to the UN General Assembly for final adoption in December of 2012.
Posted by Hunter at 1:19 PM No comments: 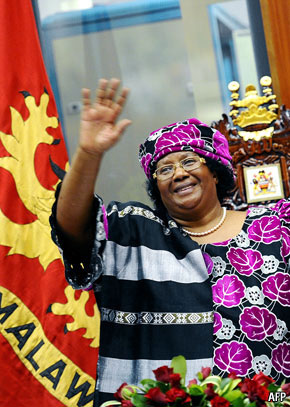 For the first time since our project has been based in Malawi the country is getting some much needed positive international media. This week the Economist has run an article entitled " Rejoice, it's Joyce" and the Guardian ran an article entitled "Malawi's Joyce Banda puts women's rights at centre of new presidency".

"Africa is changing... I hope you know that we are doing better than most countries. America is still struggling to put a woman in the White House but we have two, so we're doing fine. This is what people did not expect us to achieve but we have."

Posted by Hunter at 1:19 AM No comments: