“Mwai Wosinthika”- An alternative to custody for young people


Irish Rule of Law International (Malawi) and Venture Trust held a stakeholder meeting yesterday for the launch of a new pilot initiative they are starting called “Mwai Wosinthika”-  An alternative to custody for young people. This is an extension of a project currently being undertaken in Kachere Juvenile Reformatory centre by Venture Trust and the Diversion programme being implemented by IRLI in order to try and "divert" young people aawy from the criminal justice system through behavioural change.
The project is targeting any vulnerable young person at risk of or currently in conflict with families, school authorities, traditional authorities or the Police and courts.  Those due to appear before the courts could be referred instead by Police or Social Welfare or the Courts themselves to Venture Trust Malawi and other government agencies.   The  proposed pilot project has the potential to offer a direct alternative to custody for young offenders who have “exhausted” existing options and require an intensive level of support and supervision within the community via probation services.  (Referral criteria such as number of offences, severity and the level of risk posed to themselves and others).
“Mwai Wosinthika” aims to give young people the chance or opportunity to change in both their circumstances but perhaps more importantly and more empowering by giving the responsibility and therefore a choice about wanting to make a change in their behaviour and therefore how they deal with life’s problems.    One major consequence of which it is hoped will be the reduction in numbers of young people that are placed in custody so that they can continue to learn in school or become productive members of their community and Malawian Society.


The potential participants will be asked the following key questions:
1.     Are you ready and committed to change?
2.     If you are ready then Venture Trust along with partner agencies can help support you in that change process.
3.     School and education is highly encouraged as part of the process of change.
4.     It will involve hard work and attending a programme which you must commit to until completion.
5.     There is no money involved.  Do you understand that Venture Trust offer support and guidance as well as a model of thinking that will last for life.
The project emphasises that behaviour change has to start with a willingness on the part of the participant to take responsibility for his or her actions. There are a number of stages to the pilot programme.

Stage 1: The young person will receive an one-to-one” baseline” initial interview from a Venture Trust trained development worker, probation officer or social worker to assess suitability for the project
Following the assessment and the young persons own self-assessment of their “level of commitment” to change a decision will be made to take them on.
Stage 2: The young person will agree to attend a programme over 12 weeks in which will emphasise the main areas ofSelf-confidence; education & employability; behaviour and attitude and finally reducing the risk of re-offending.
Stage 3: Dependant on their progress which is benchmarked by use of Venture Trust’s own monitoring & evaluation system the young person may be invited to attend a adventure weekend away from the  sometimes negative distractions of the city.
Stage 4: Upon completion of the programme the young person will receive a certificate of their achievement and be supported to prepare their own action plan (“dongo solo”) which focuses on working towards a life objective by setting goals for the following year.
(In an event of a young person been ordered by the Court to undertake the programme and not completing this will be communicated to the court by means of the appointed probation officer.)
Who are we?
Irish Rule of Law International is a joint initiative of the Law Society of Ireland and the Bar Council of Ireland, dedicated to promoting the rule of law in developing countries.  IRLI seeks to harness the skills of Irish lawyers in using the law as a means of tackling global injustice and empowering all people to live in a society free from inequality, corruption and conflict.
Venture Trust is a Scottish based charity that has grown significantly over  the last ten years as its approach of working with vulnerable young people (often whom others will not work with or who are excluded from school or life’s opportunities) offers an welcome alternative to custody for Magistrates, courts and police services that are already stretched due to budget and capacity. In 2011 Venture Trust was invited by the Malawi Government under the sponsorship of the Scottish Government as part of the Scotland-Malawi Partnership Agreement to work initially with vulnerable young people in Kachere Prison (now Kachere Reformatory Centre).

Posted by Hunter at 2:52 AM No comments: 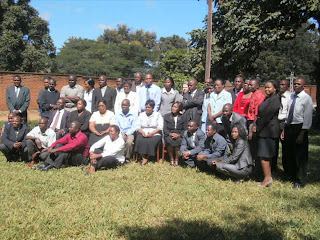 Above is a photo of participants to the follow up training for magistrates and Police Officers by the Catholic Commission for Justice and peace held on the 19th and 20th of April. The training comprised of interactive workshops on the Diversion project and a number of lectures on Diversion, the Criminal Prosecution and Evidence Code, the rights of juveniles and the accused and an interesting and very relevant discussion on expired remand warrants. Speakers included his Lordship Mr justice Twea, Mateyu Sisya from the Malawian Law Society and speakers from both the Legal Aid Department and the Ministry of Justice

Posted by Hunter at 2:42 AM No comments:

A very easy (and constitutional) transition to a new President and a new political party in Malawi over the last week. The Guardian have a good review of Joyce Banda here

The mood of the country seems uplifted and there is great hope for the future. Let's hope JB lives up to her reputation! 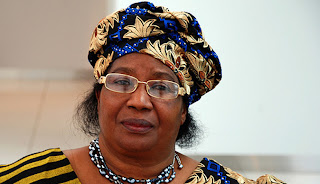 A review from Reuters on Bingus final years  here
Posted by Hunter at 7:03 AM No comments: